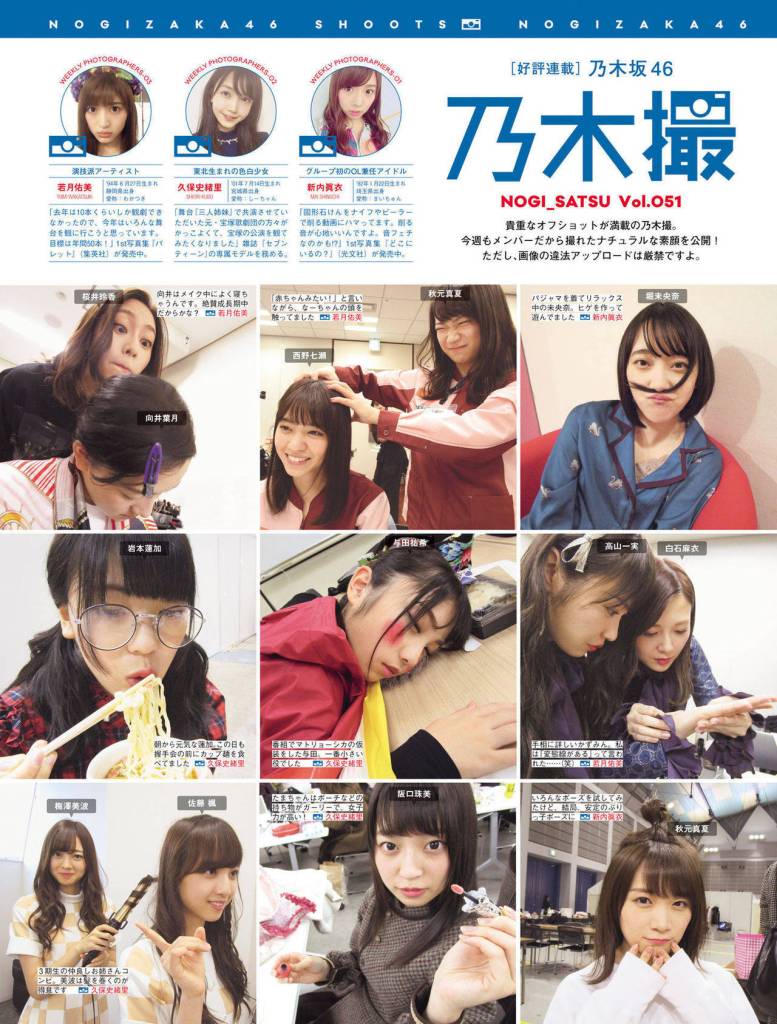 Nogisatsu is full of off-shot photos.
Members’ natural faces were taken and publicized here this week as well!

Weekly Photographers-01
Group’s first Office Lady Concurrent Idol – Shinuchi Mai
“I’m addicted to watch videos of solid soap gets shave off by knife and peeler. The sound of shaving is making me calm. Maybe I have a sound fetish!?” 1st photobook 『Doko ni Iru no?』(Koubunsha) is on sale.

Weekly Photographers-02
Fair-skinned girl from Tohoku －Kubo Shiori
“I’m having a co-starring with some former Takarazuka actresses in ‘Three Sisters’ stage play. They are looking so cool that makes me want to try to watch Takarazuka.” She is an executive model of fashion magazine 『Seventeen』

Hori Miona
Miona who is wearing a pajama and relaxed. She is also playing by making a mustache. 📷 Shinuchi Mai

Sakurai Reika・Mukai Hazuki
Mukai often falls asleep when having a make-up. Maybe because of her growth period. 📷 Wakatsuki Yumi

Yoda Yuki
Yoda had an appearance as Matryoshka doll in a TV program. Her role was the smallest one. 📷 Kubo Shiori

Iwamoto Renka
Renka is always being vigorous since morning. On this day of handshake event, she was eating cup noodles. 📷 Kubo Shiori

Akimoto Manatsu
She tried several poses, but in the end, she chose the usual cunning pose. 📷 Shinuchi Mai

Sakaguchi Tamami
Things inside Tama-chan’s pouch are so girly. She has a high femininity. 📷 Kubo Shiori 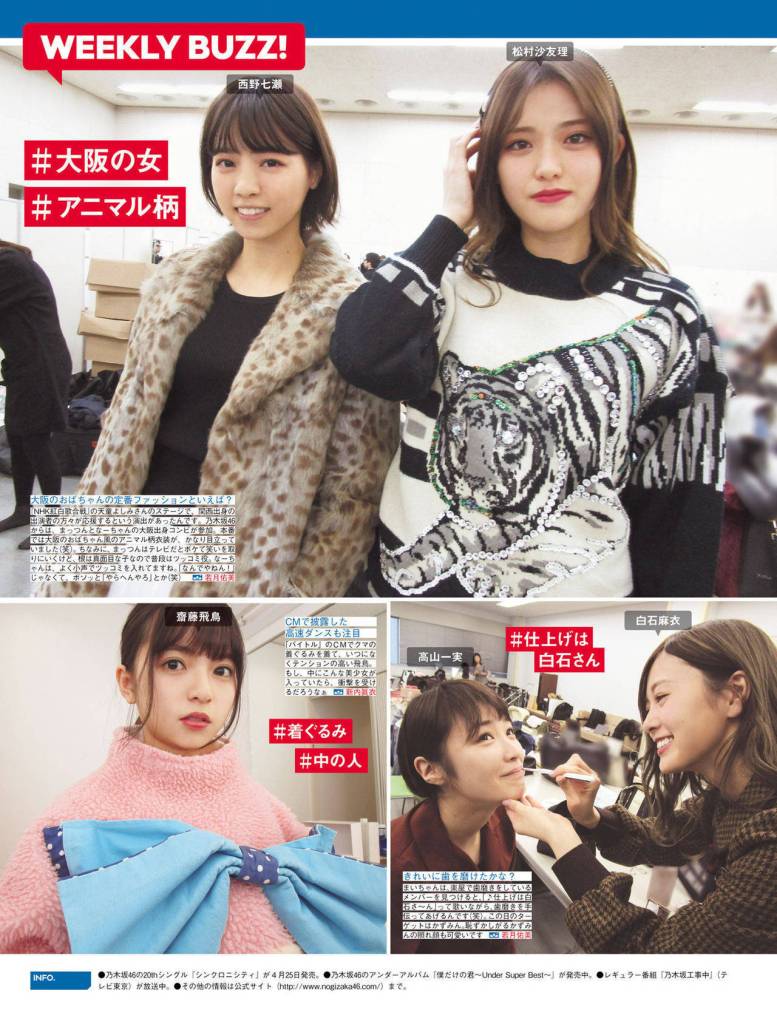 WEEKLY BUZZ!
Matsumura Sayuri・Nishino Nanase
Osaka’s old ladies’ specialty fashion is?
There was an appearance of Kansai origins who were supporting Tendo Yoshimi-san’s performance in “NHK Kouhaku Utagassen”. From Nogizaka46, Mattsun and Naachan were participated because they are also from Kansai. During the performance, they were wearing animal patterned clothes as the specialty of Osaka’s old ladies and they were standing out (lol). By the way, Mattsun is usually doing dumb things and taking some comedy acts on the TV, but actually her true nature is a diligent type so she often being a retorting role. As for Naachan, she often retorts with a small voice.  It’s not “What the heck! (Nandeyanen!)” but instead, “Like hell I’d do that” or so like that with a small voice (lol). 📷 Wakatsuki Yumi
#OsakaLadies #AnimalPatterns

Shiraishi Mai・Takayama Kazumi
Did you brush your teeth well?
Whenever Mai-chan found a member who were brushing their teeth, she always said, “♪Let Shiraishi-san do the finishing touch~”. She said that while singing and helped brushing (lol). This day’s target was Kazumin. Kazumin who was being shy is also cute. 📷 Wakatsuki Yumi
#Shiraishi-sanDoesTheFinishingTouch

Saito Asuka
Please pay attention to the fast moves dancing in the CM
She was wearing a stuffed bear costume in “Baitoru” CM and she was unusually high there. If we knew that a beautiful girl is inside the costume, we might be shocked, right? 📷 Shinuchi Mai