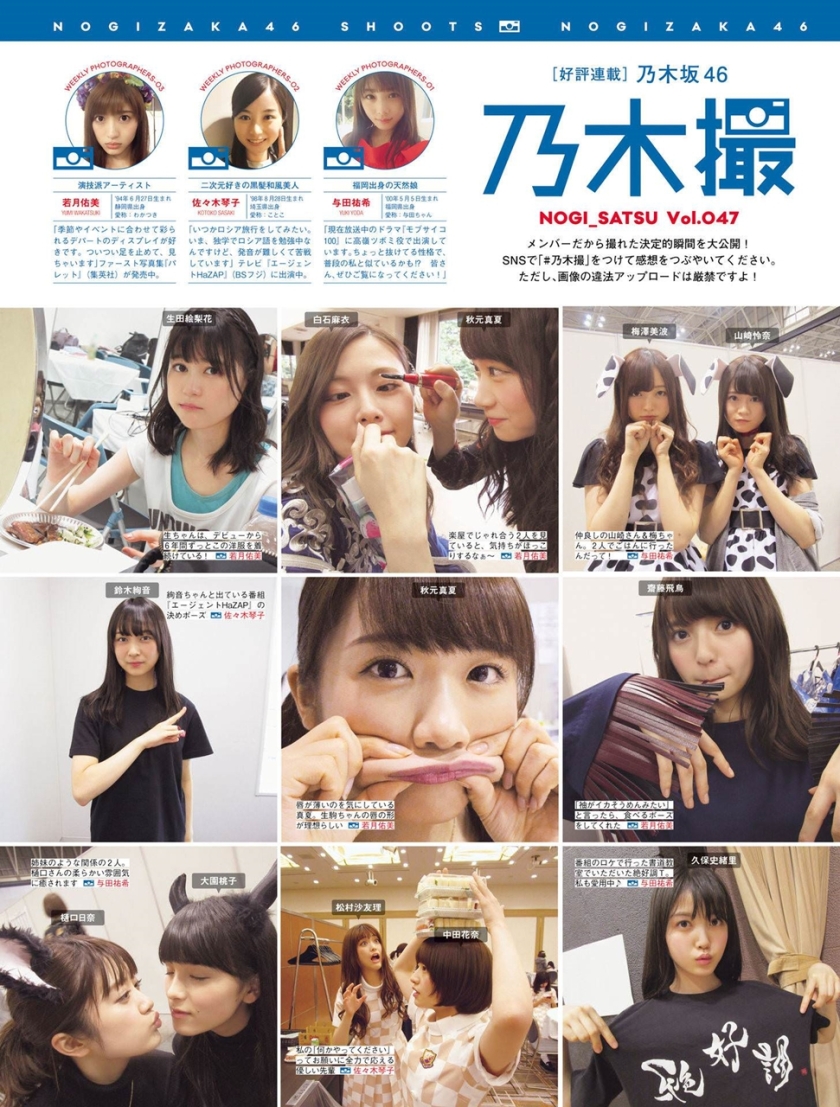 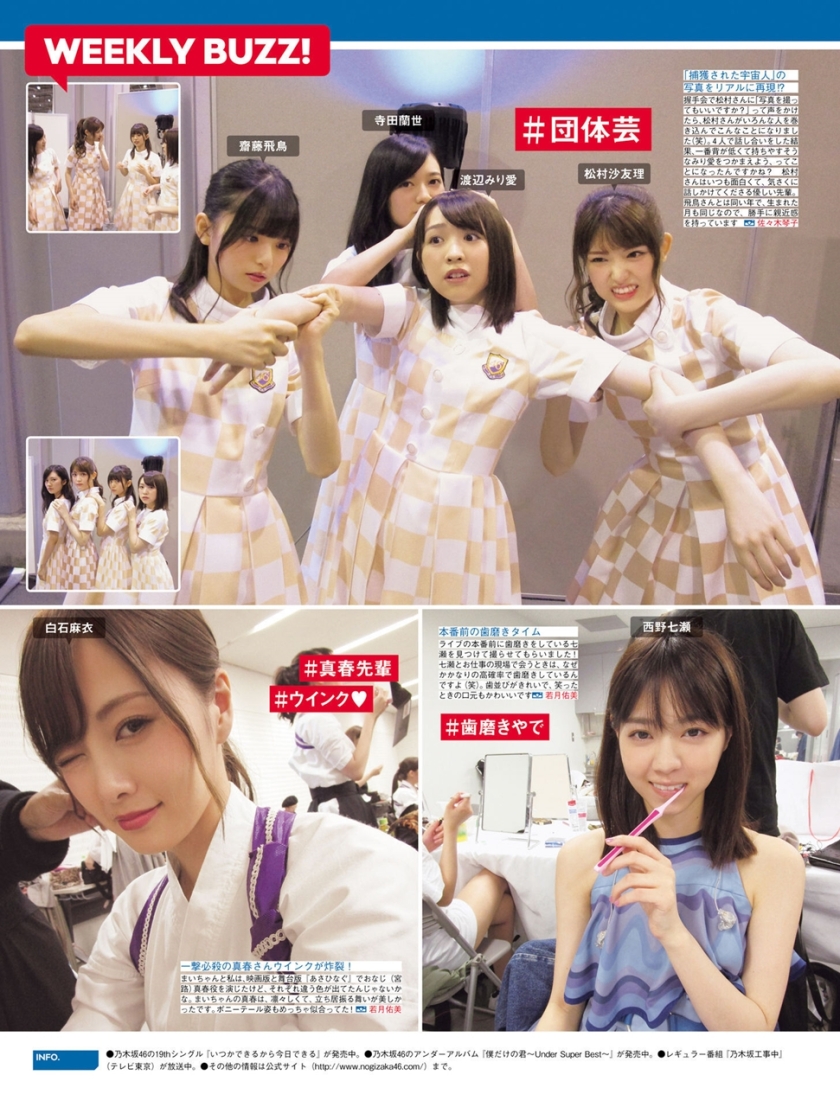 Ultimate moments captured by the members themselves has been made public!
Please give your impressions using #NogiSatsu at SNS.

Weekly Photographers-01
Nature Girl from Fukuoka – Yoda Yuki
“I’ll be appearing as Takane Tsubomi at Mob Psycho 100, a drama which is currently being broadcasted. She is somewhat airhead, so we maybe similar with this personality!? Please check it out everyone!”

Weekly Photograpers-02
Black Hair Japanese Beauty who loves 2Ds – Sasaki Kotoko
“I’d like to travel to Russia someday. I’m currently self-studying Russian, but the pronunciation is so difficult and I’m struggling with it.”
She is currently appearing at TV “Agent HaZAP” (BS Fuji).

Weekly Photographers-03
Performing Artist – Wakatsuki Yumi
“I love the decorations of department stores’ displays when it’s being matched according to seasons or events. Before I realize it, my legs would stop just to view those stores.”
1st photobook “Palette” (Shuueisha) is currently on sale.

Ikuta Erika
Ikuchan has been wearing this outfit for 6 years already since the debut! 📷 Wakatsuki Yumi

Shiraishi Mai・Akimoto Manatsu
Every time I see these two together in dressing room, I feel relieved~ 📷 Wakatsuki Yumi

Umezawa Minami・Yamazaki Rena
Yamazaki & Ume-chan are getting along with each other.  They went out for a meal, they say! 📷 Yoda Yuki

Suzuki Ayane
Ayane-chan is doing the pose from the program in which is currently appearing together with me, “Agent HaZAP”. 📷 Sasaki Kotoko

Akimoto Manatsu
Manatsu is concerned about her thin lips. It seems that the shape of Ikoma-chan’s lips is her ideal one. 📷 Wakatsuki Yumi

Saito Asuka
When I told her, “That sleeves looks like ika-soumen*”, she suddenly did an eating pose for me. 📷 Wakatsuki Yumi

Matsumura Sayuri・Nakada Kana
The kind senpai who went all-out responding to my “Please do something” kind of request. 📷 Sasaki Kotoko

Kubo Shiori
She received a Zekkochou** T-shirt when she went to a Calligraphy lesson by a roke program. That’s my favourite too ♪ 📷 Yoda Yuki

Saito Asuka・Terada Ranze・Watanabe Miria・Matsumura Sayuri
The photo of “The Captured Alien” is being potrayed for real!?
When I asked Matsumura-san, “Can I take a picture of you?” when we were at handshake event, she suddenly dragged many people and this happened (lol). And so after the four people finished discussing, they came up with the idea of the one smallest among us should be easy to capture so they chose Miria, that’s why it resulted to this. Matsumura-san is always interesting; she talks to me open-heartedly. She’s a kind senpai. I’m in same age with Asuka, we were born at the same month, I’m arbitrarily thinking that we have affinities. 📷 Sasaki Kotoko
#EntertainmentGroup

Shiraishi Mai
Maharu-san bursting out her instant kill by doing a wink!
Mai-chan and I have both the same role (Miyaji) Maharu at film and stage play, but we have different vibes in our own way. Mai-chan’s kind of Maharu is dignified and her behaviours are so beautiful. And ponytail really suits her! 📷 Wakatsuki Yumi
#Maharu-senpai #Wink<3

Nishino Nanase
Toothbrush time before the actual work
I took a picture of Nanase when she was tooth brushing before a concert starts! For some reason, every time Nanase arrives at the workplace, a high probability is present that she would go for tooth brush (lol). Her teeth alignment is beautiful, and the shape her mouth when she is laughing is so cute too. 📷 Wakatsuki Yumi

*Ika-soumen: Ika Somen is raw squid that has been sliced to resemble thin noodles.
**Zeekouchou (絶好調): in perfect form